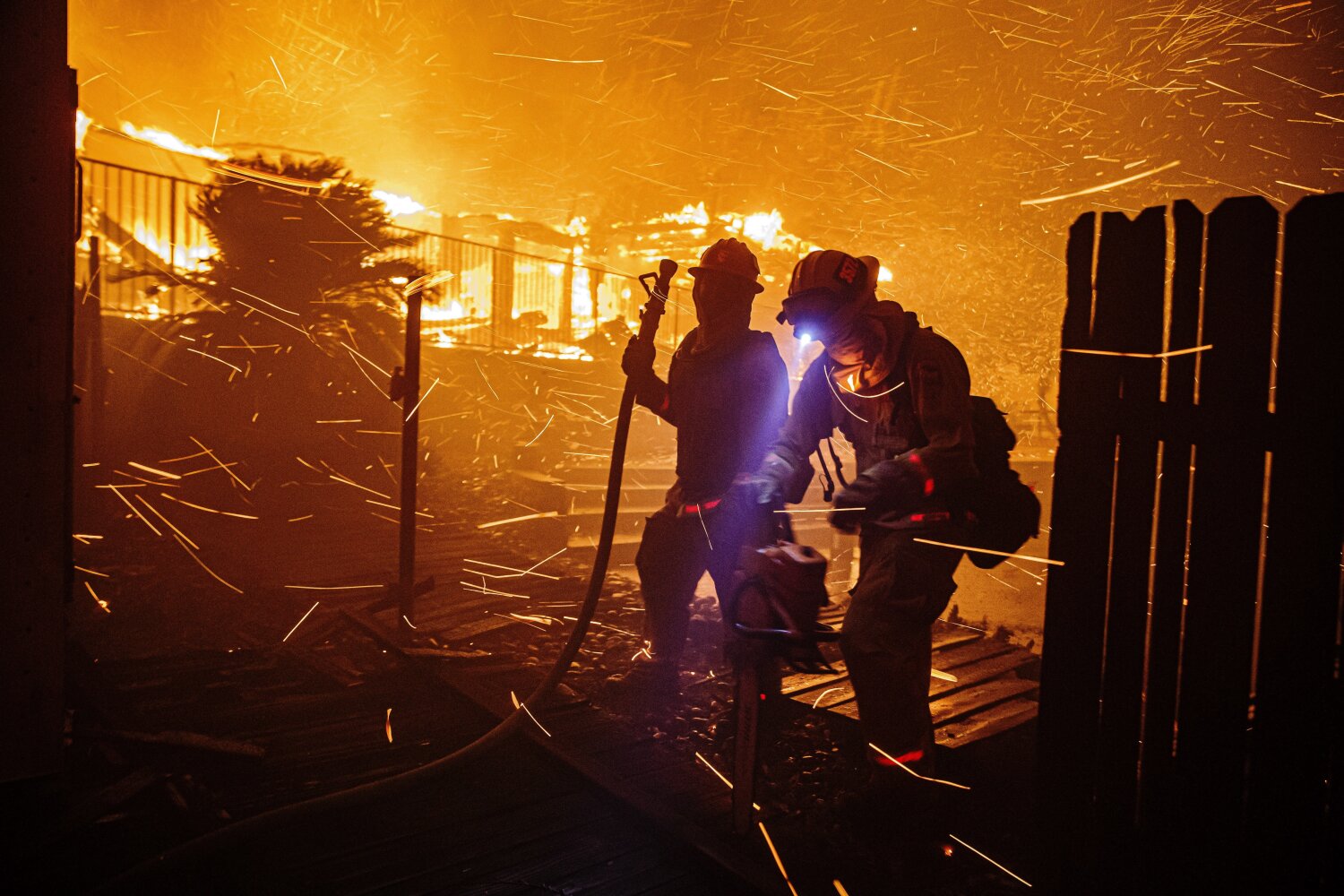 Pummeled by fires, drought and floods, California’s Democratic primary voters put fighting climate change at the top of their list of issues for the next president to tackle.

Nearly half of likely Democratic primary voters call the issue the No. 1 priority for the next president, according to a new statewide poll conducted by UC Berkeley’s Institute of Governmental Studies for the Los Angeles Times.

By contrast, fewer California primary voters — about 1 in 3 — called healthcare the highest priority, even though differing healthcare proposals have dominated the debate among Democratic presidential candidates for months.

Presidents typically have a limited window in which to get major legislative proposals through Congress — the first two years generally see the most victories — and usually can manage to push only a couple of top priorities. The last two Democratic presidents devoted much of that crucial period to healthcare, successfully for President Obama, unsuccessfully for President Clinton.

The poll asked Democratic primary voters to choose which of four major issues that have been debated in the campaign is their No. 1 priority for the next president to take on: climate change, healthcare, immigration reform or changes to the criminal justice system aimed at reducing the number of people in prison.

“For the more than 40 years I’ve been polling Californians, protecting the environment has always been a high priority to voters here. But now, with the negative consequences of global warming appearing to bear down hard on the state, concerns about climate change will likely remain among voters’ top issues well into the foreseeable future,” said Mark DiCamillo, the veteran pollster who directs the Berkeley Institute for Governmental Studies poll.

The results showed significant differences among Democrats along lines of race, education and age.

The voters most likely to cite climate change as the top priority included whites, those with college educations and those who defined themselves as “extremely liberal.” Voters younger than 30 were also especially likely to rank climate change as No. 1.

Healthcare ranked as the top priority for African American voters. The issue was essentially tied with climate change as the most important among voters in their 40s, with voters in their 50s and 60s just slightly less likely to cite healthcare as issue No. 1.

Latino voters were closely divided. Those who predominantly speak Spanish put immigration reform at the top of their list, while those who identified themselves as bilingual or mostly English-speaking split closely between climate change and healthcare.

Those differences among voter groups showed up among supporters of the top candidates.

Liberal, college-educated white voters form the core of Sen. Elizabeth Warren’s support in the primary. And supporters of the Massachusetts senator were the most likely to list combating climate change as their top issue — 62% of her supporters did so.

By contrast, former Vice President Joe Biden gets his strongest backing from black voters, more moderate and conservative Democrats and whites without college degrees. His supporters were slightly more likely to put reforming the healthcare system at the top of their list.

Biden’s supporters were also more likely than supporters of other candidates to list immigration reform as the No. 1 priority.

Sen. Bernie Sanders of Vermont has made his call for “Medicare for all” a signature of his campaign, but his supporters were still somewhat more likely to pick climate change as their top priority.

The poll asked Democratic primary voters whether they would prefer a system that eliminates private insurance and provides a government plan for all Americans or a system with the option of enrolling in Medicare or keeping private insurance.

Overall, primary voters preferred the optional approach 57% to 37%. Of the supporters of the four leading candidates, Sanders’ backers were the one exception. By 64% to 32%, they preferred the mandatory Medicare approach.

Supporters of Biden and South Bend, Ind., Mayor Pete Buttigieg overwhelmingly backed the optional plan, which both candidates have advocated.

Warren’s backers were closely divided, with 52% to 44% preferring an optional plan. She released a far-reaching plan last month to provide Medicare to all Americans, but when the plan drew intense criticism for its huge price tag, she said she would advocate moving in two steps, setting up a Medicare option in her first year as president and working toward a comprehensive government system that she would propose to Congress in year three.

More than 8 in 10 likely Democratic primary voters considered both climate change and healthcare to be among the top-priority issues.

Voters were more divided on immigration reform and changes to the criminal justice system.

Only 3 in 10 labeled changes in the criminal justice system a top priority, while about 6 in 10 called it important, but not a top priority.

The Berkeley IGS poll for the Los Angeles Times was conducted Nov. 21-27 online in English and Spanish among a representative sample of registered California voters, including 1,694 considered likely to take part in the March 3 Democratic primary. The estimated margin of error for the Democratic primary sample is 4 percentage points in either direction.